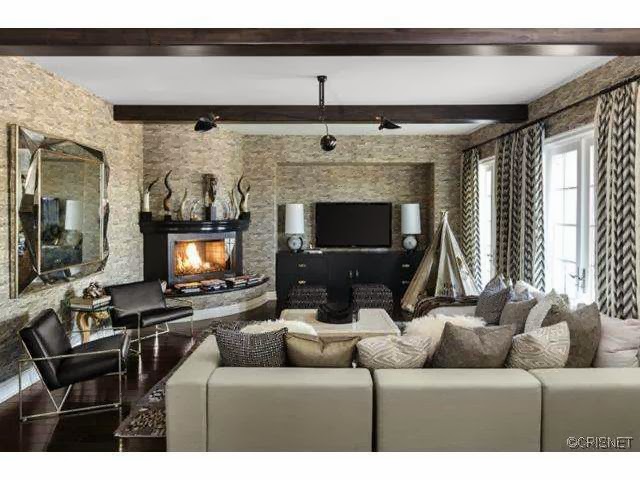 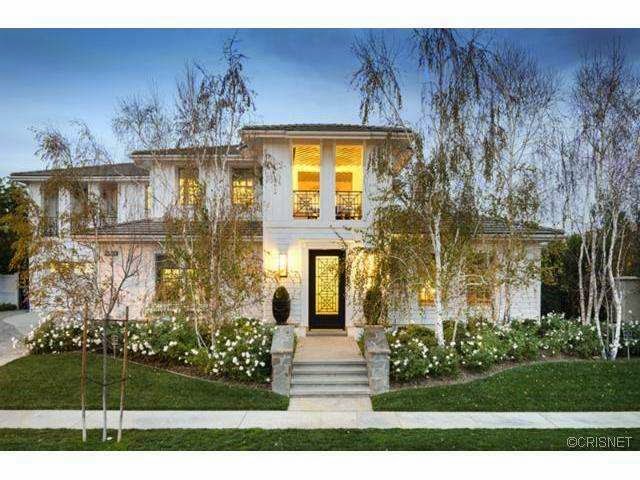 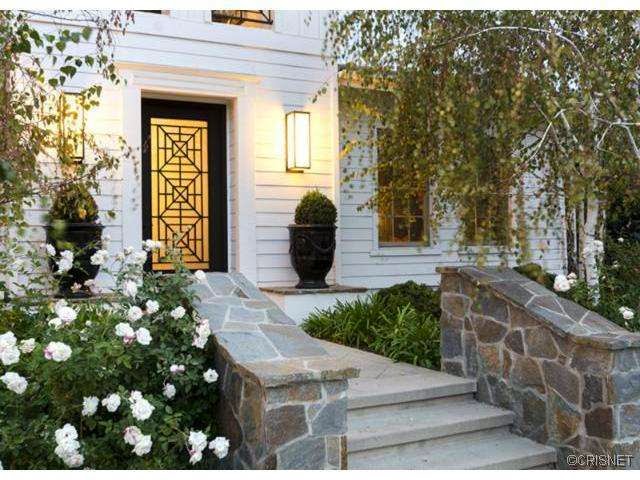 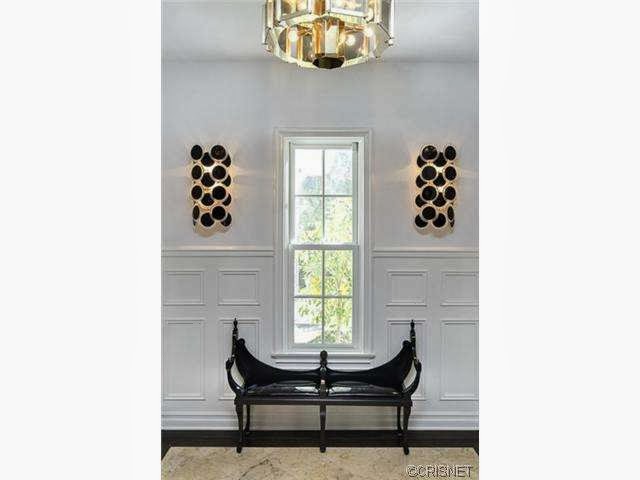 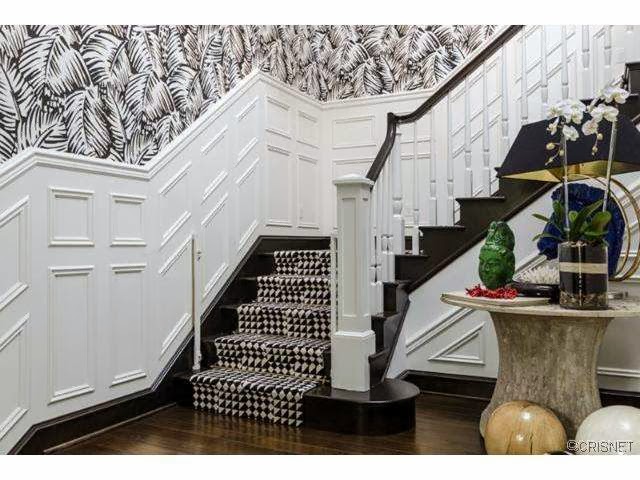 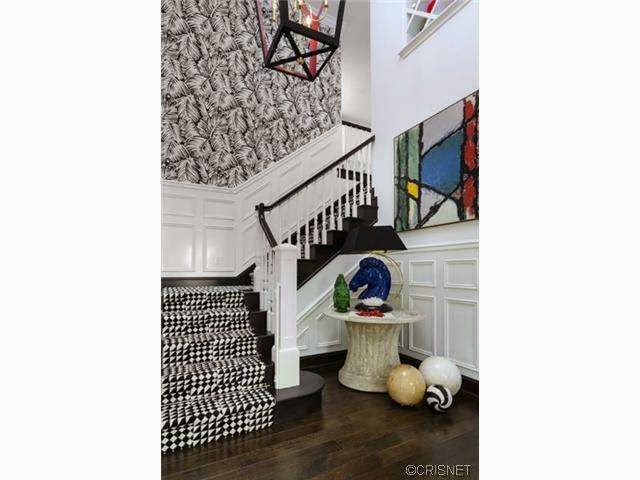 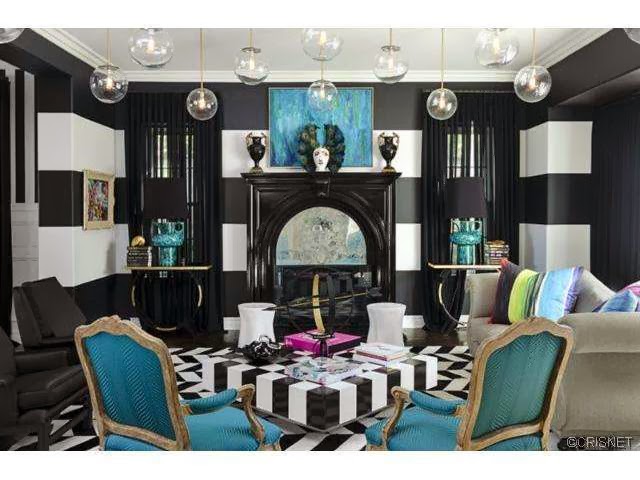 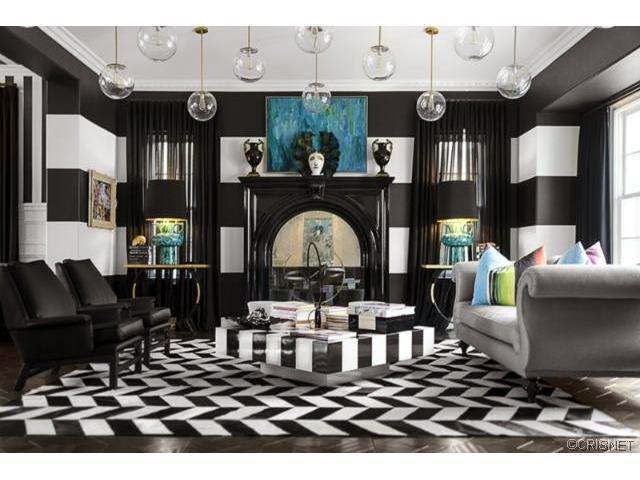 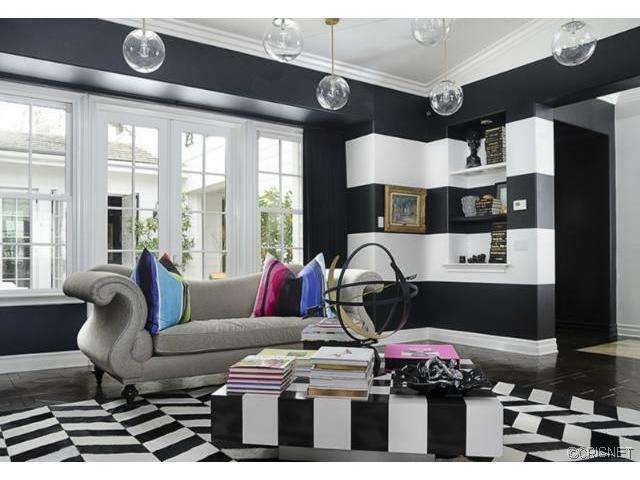 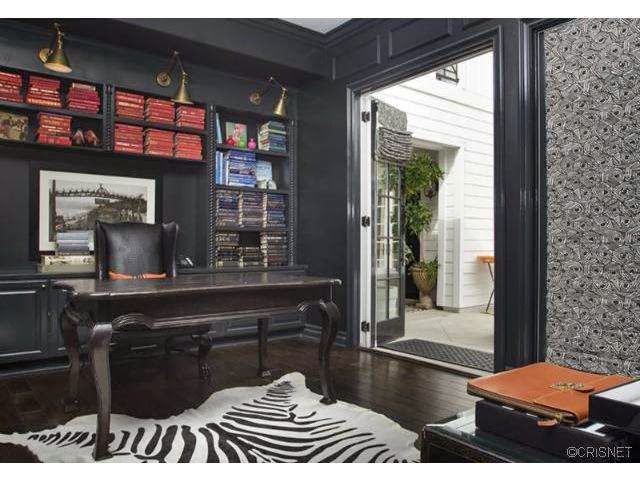 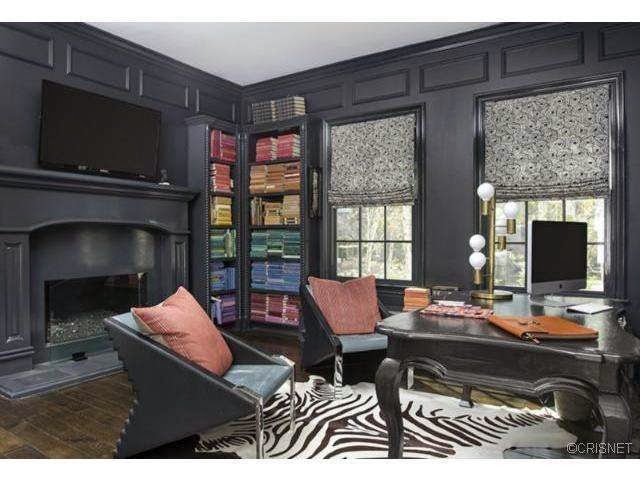 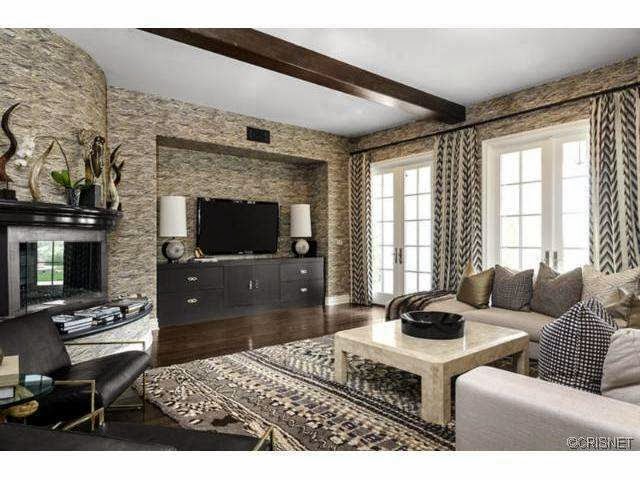 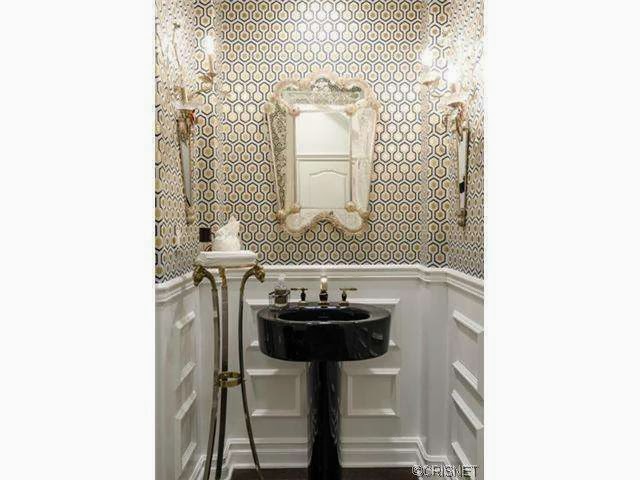 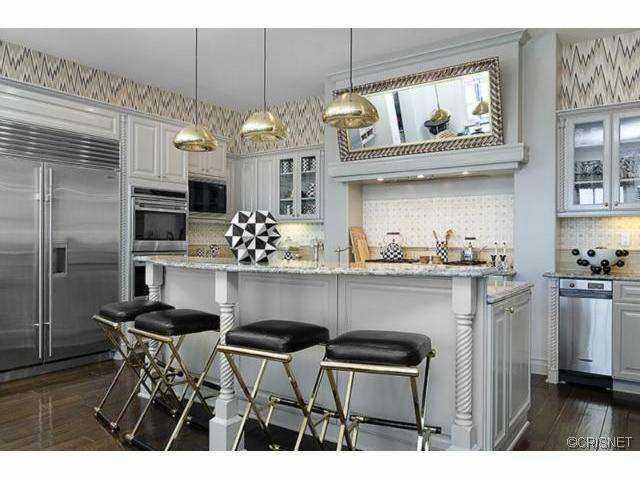 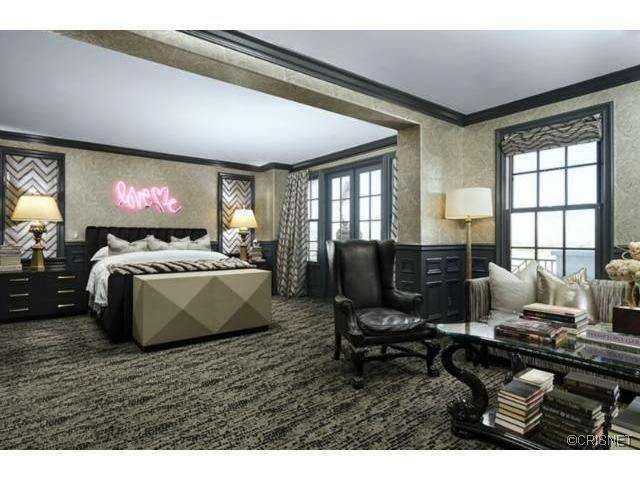 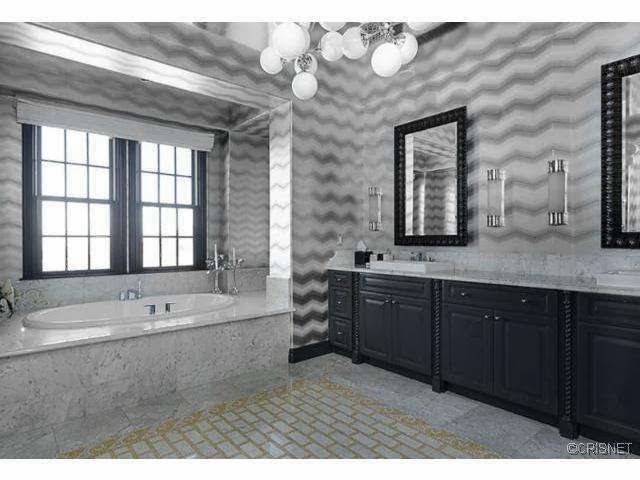 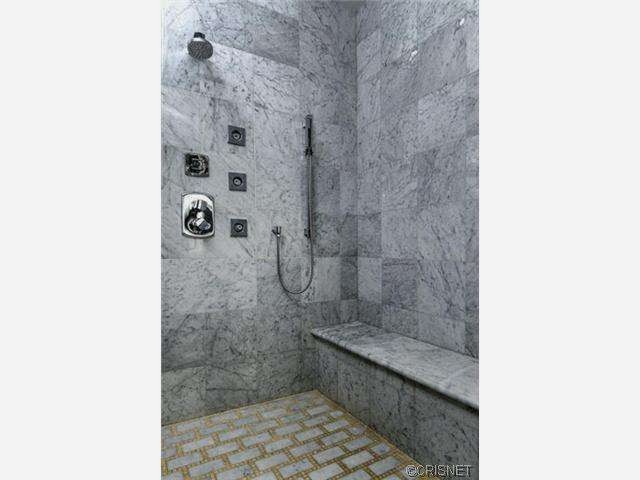 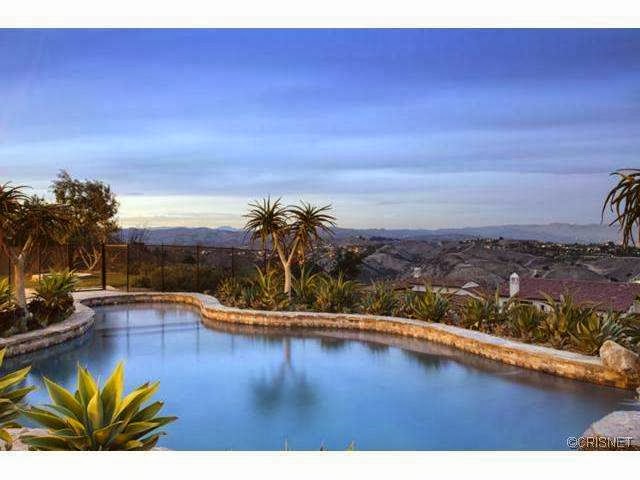 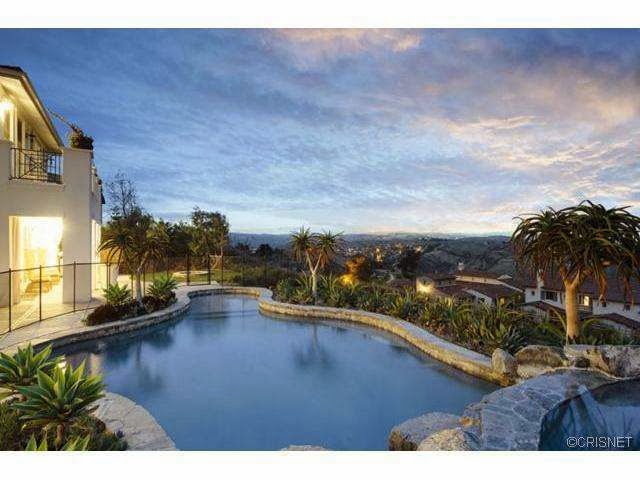 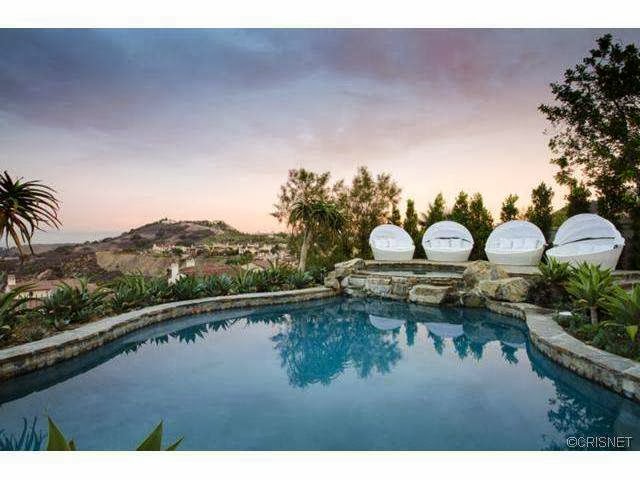 
While it remains to be seen whether they did, in fact, buy from Keyshawn Johnson — property records show that the sprawling mansion at 25344 Prado De La Felicidad is still owned under the retired NFL star’s name — Kourtney Kardashian and Scott Disick are definitely on the move.
The couple has quietly listed their current home in Calabasas, CA, for sale. The Los Angeles Times reports that Kardashian and Disick are asking $3.499 million for the designer pad that was “dramatically reimagined” by celebrity decorator Jeff Andrews. That’s more than double what the “Keeping Up With The Kardashians” stars paid for the home in December 2010.
Built in 2004, the East Coast traditional offers a comfortable four bedrooms and four full bathrooms. However, in recent months, the celebrity family has found that they have simply outgrown the 5,400-square-foot home. “Our family is bigger since we moved in,” Kardashian told Domaine. “I’d like to have a guest room and more space outside for the kids.”
Bathed in black and white, the interiors feature colorful accents clearly aimed at drawing the eye. The style is especially prevalent in the living and the office, where various accessories and finishes pop in the modern surroundings.
In addition to its luxury touches, the designer living space features an open floor plan containing an entry breezeway, a gourmet kitchen and a master suite complete with a private sitting area, balcony, two walk-in closets and a spa-like spa sheathed in marble accents. Outside, a swimming pool, patio and loggia frame mountain and city views.
On the heels of the news that Justin Bieber had been arrested in Florida on suspicion of drunk driving, rumors ran rampant that Kardashian and Disick had purchased a massive Calabasas manse owned by former New York Jets and Tampa Bay Buccaneers star Keyshawn Johnson. The Pro Bowl receiver-turned-NFL analyst, whose distaste for his pop star neighbor’s driving habits have been widely publicized, had been shopping the 11,746-square-foot home since February 2013. The mansion last listed for $8.5 million before being pulled from the market in December.
Earlier this month, it was another of the Kardashian clan who made real estate headlines. After weeks of speculation that Khloe Kardashian and Lamar Odom were privately shopping their Tarzana home, the couple’s property officially hit the MLS with an asking price of $5.499 million.
Tomer Fridman of Sotheby’s International Realty has the listing.

TheOpulentLifestyle.net
california residences for sale lifestyles of the rich Scott Disick and Kourtney Kardashian Lists their Calabasas Home for $3.5 Million the opulent lifestyle